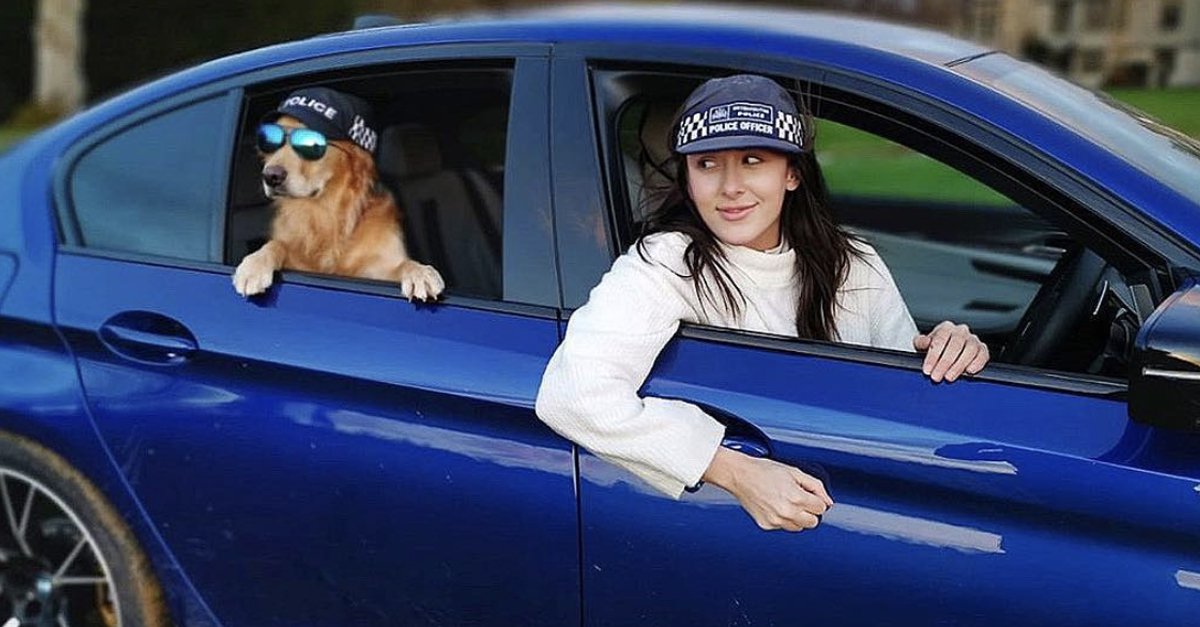 Most dogs like to run around and play fetch. Others like to cuddle all day long with their favorite humans. But Photographer Ursula Aitchison’s Golden Retriever Hugo is an embarrassment to his breed. Why? Because instead of doing doggy things, he’s busy doing all tons of human activities and the social media is loving it.

Hugo and Ursula go together like butter on toast. She’s a photographer, and her doggy seems to love being photographed. They’re a perfect match! When Ursula takes out her camera, he’ll pose like he’s expecting a paycheck at the end of the month. But in a way, it’s sort of become his job, especially now that he’s become an internet star.

The Instagram account, @hugoandursula has over 34 thousand followers and each one of them has fallen in love with this adorable pooch who dresses up and starts doing things that aren’t typical for a golden retriever. But if you think you’re impressed now, wait until you see some of the hilarious photos Hugo has taken so far. You’ll be barking “woof” in no time!

Who needs a bae when you’ve got the ultimate sleepover companion? Just look at these two in their matching plaid pajamas. They’re celebrating the number of new followers by doing a slumber party that includes activities like sleeping, napping, and oh yes, snoozing! We bet all you have as a sleeping companion is a boring old human.

He Keeps Up With His Grooming

This is fur real, yo! Hugo is totally feeling himself and clearly isn’t afraid of anyone judging him for wearing hair curlers at the salon. Not that he has anything to be ashamed of. After all, even golden retrievers need to touch up their roots now and then, especially when they became social media celebrities. Scratch that! He’s a freaking supermodel!

He Could Use A Drink

It’s 5 o’clock somewhere, and Hugo could certainly use a glass of red wine after a tough shoot. But he probably feels a little embarrassed that you caught him drinking and texting. Oh, well! Maybe he needed a drink after getting a text from his ex, who told him that she wanted to start seeing other dogs. Looks like he might need Ursula to pour him a second glass.

He Brushes His Teeth

Hugo looks so adorbs in this photo! Now, naysayers might say that dogs don’t need to brush their teeth, but of course, he’s going to do it anyway. He’s no ordinary dog, after all! He needs to show off his pearly white smile in front of the cameras. Too bad he doesn’t have opposable thumbs. Hopefully, Ursula can help him brush after she’s done.

When your human is a photographer, you have to make sure to stay fit and that means pumping iron and doing tons of cardio, which can be ruff. But Hugo is ready to feel the burn alongside Ursula. After he’s done, he probably has a healthy protein shake to replenish his body. We’ll bet he has all the pooches at the park swooning over his hot bod!

Sherlock Bones Is On The Case

If Hugo is dressed as detective Sherlock Bones then that makes Ursula Watson. The two are out on the streets sleuthing it up and solving crimes wherever evildoers may strike. We would probably pay to see a TV show with these two. Plus, Ursula’s pup really wears that coat well. It makes him look professional and dignified.

Your Uber Is Here

For some dogs, learning to sit or stay is pretty much the extent of their life goals. But Hugo just learned how to drive. Now, normally, we wouldn’t put our lives in the paws of a dog, but we might be willing to make the exception for Hugo. We just need to bring some extra doggy treats as a form of payment. You don’t even need to check his Uber star ratings. He’s obviously a good boy. Hopefully, he’s a good driver, too!

Ursula has taken photos of Hugo doing all kinds of things. He’s driven cars, solved crimes, exercised and brushed his teeth (or try to anyway). But he wants his followers to know that spa day is his favorite activit. He genuinely looks happy and relaxed lying next to Ursula with cucumber slices on his eyes.

Someone Asked People To Share Some Random Acts Of Kindness They Experienced, And Now We Can’t Stop Tearing Up

These Poor People Decided To Shop Online, Only To End Up Deeply Regretting It